Commercial Expert, based on Aycliffe Business Park in Newton Aycliffe, was chosen as the first introducer to Durham-based Atom Bank, which launched its revolutionary app earlier this year.

Created in April 2014, Atom currently employs just over 190 people at its offices at Aykley Heads in Durham and was launched after raising more than £135m from over 100 private and institutional investors.

It launched its new app, which enables customers to create new accounts within minutes at the touch of a button, in April. Atom is now offering secured lending to SMEs through specialist business intermediaries, with FCA-regulated Commercial Expert the first to come on board.

Commercial Expert, which manages more than £48m-worth of deals a year for clients nationwide, expanded to new offices in January after increasing its team to nine.

Managing director Mike Coates says this agreement with Atom is another big deal for his growing company.

“This is a huge feather in the cap for us and we’re delighted to be working with Atom,” said Mike.

“We have a similar viewpoint in having a modern approach to working with clients. The trouble with commercial finance is everything takes so long, and it shouldn’t. There are too many professionals who haven’t adapted to the modern world, but this is a bank which has been created for the modern world.

“We’re adjusting all the time to keep up with that. The world of sitting down with your bank manager, and convincing him that everything is OK, has almost completely gone. It’s now about scoring and information, modelling and forecasting, and doing it all online. We’re very commercially and IT aware, so the synchronicity between ourselves and Atom Bank is a perfect fit.

“It’s also all about having the right systems, processes and permissions. We’re FCA-regulated, we’re a member National Association of Commercial Finance Brokers (NACFB) and we have the perfect systems in place to be able to deliver Atom’s offering effectively.”

Graham Moore, Head of Business Development at Atom Bank said: “We are excited to have Commercial Expert as our first registered intermediary to help us change the face of SME banking.

“We are both passionate about improving the end to end process for SMEs and really ‘lifting the lid’ so they fully understand how a bank makes the decisions it does, which we believe, working with their intermediary, can really help an SME to improve their business.

“The process we have developed has been designed to remove as many of the traditional friction points as possible and has been built with the intermediary in mind to ensure the flow of information is as painless as possible”.

He explained: “Atom will deal with Intermediaries in a different way, focussing on efficiency and transparency.

“We’re the first registered introducer to Atom’s Business Banking team in the country and we’ve been given an initial tranche of funds to access. We already have £1m-worth of applications now under consideration, so we’re hoping to be the first one across the line.”

Mike says businesses can now apply for Atom loans through Commercial Expert, with Atom lending for everything from new printing equipment to capital investment and general business loans.

“But ultimately they’ll also be offering business accounts and everything else you would expect from a normal bank,” added Mike. 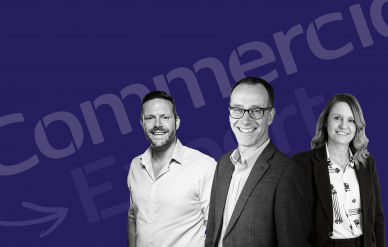 Running for Life, Raising in Memory

Mike Coates, Managing Director
XCommercial Expert uses cookies on our website to give you the most relevant experience by remembering your preferences and repeat visits. By clicking “Accept”, you consent to the use of ALL the cookies. However you may visit Cookie Settings to provide a controlled consent. Read MoreRejectConfirmCookie settings
Manage consent

This website uses cookies to improve your experience while you navigate through the website. Out of these cookies, the cookies that are categorized as necessary are stored on your browser as they are essential for the working of basic functionalities of the website. We also use third-party cookies that help us analyze and understand how you use this website. These cookies will be stored in your browser only with your consent. You also have the option to opt-out of these cookies. But opting out of some of these cookies may have an effect on your browsing experience.
Necessary Always Enabled
Necessary cookies are absolutely essential for the website to function properly. These cookies ensure basic functionalities and security features of the website, anonymously.
Functional
Functional cookies help to perform certain functionalities like sharing the content of the website on social media platforms, collect feedbacks, and other third-party features.
Performance
Performance cookies are used to understand and analyze the key performance indexes of the website which helps in delivering a better user experience for the visitors.
Analytics
Analytical cookies are used to understand how visitors interact with the website. These cookies help provide information on metrics the number of visitors, bounce rate, traffic source, etc.
Advertisement
Advertisement cookies are used to provide visitors with relevant ads and marketing campaigns. These cookies track visitors across websites and collect information to provide customized ads.
Others
Other uncategorized cookies are those that are being analyzed and have not been classified into a category as yet.
Save & Accept
close